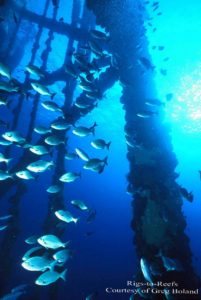 OFFshoreHub ITRH researcher Professor Susan Gourvenec and UWA Law Dean Professor Erika Techera have been pondering a current issue faced by many Australian operators with ageing assets: is it better to leave disused oil platforms where they stand?

The global offshore oil and gas industry has installed a wide variety of infrastructure throughout our oceans, including tens of thousands of wells, thousands of platforms and many thousands of kilometres of seabed pipelines. Many of these structures have been in service for several decades and are approaching retirement.

After decommissioning and cleaning a platform, seabed structure or pipeline, its operators are faced with a choice: dismantle and remove it completely; leave it in place; or remove some of it while leaving the rest behind. The choice depends largely on what is technically feasible, as well as what is desirable from an environmental, economic and societal perspective, and of course what is legally allowed.

Australia’s offshore oil and gas industry is less mature than those in Europe and the United States. As a result, the fate of decommissioned offshore infrastructure is still an emerging issue. The lack of any established practice gives Australia a unique chance to show innovative leadership on this issue.

Developing an Australian version of the “rigs to reefs” policy would require input from engineers, natural scientists, environmental managers, oil and gas economists, lawyers and others, to work out precisely what is possible and preferable in different locations.

This extract is taken from the The Conversation. Full article is available here