Field trip to the Rowley Shoals

Members of both the UWA Ocean Dynamics group and the OFFshore ITRH Project 1 (Metocean) team recently returned from a second field campaign on the Australian Northwest Shelf. This campaign was focused just inshore of the Rowley Shoals, a group of three atoll-like coral reefs about 260 km west of Broome. The experiment was a collaboration between IOMRC partners UWA and AIMS (Australian Institute of Marine Science), and field operations were conducted from the AIMS Research Vessel Solander.

The aim of the 2019 Rowley Shoals Field Trip was to deploy and subsequently recover four UWA moorings (150-330 m depth) and one bottom-mounted frame inshore of Imperious Reef. The UWA moorings consisted of three traditional moorings, a profiling mooring with a surface float and one bottom-mounted lander. The moorings and bottom frames, equipped with a range of oceanographic equipment, logged ocean variables including water currents, temperature and salinity for six weeks in 250m of water depth. A Smith-MacIntyre grab was also used to collect sediment from the sea bottom.  Further ship-based observations were collected through a series of across-shelf conductivity-temperature-depth (CTD) transects.

The experiment captured the spatial scales of extreme physical oceanographic processes on the North West Shelf, particularly nonlinear internal waves or solitons. Novel near-seabed measurements will be used for PhD studies of oceanic benthic boundary layer dynamics and sediment transport. An ultimate goal of the project is to gain a better understanding of these oceanographic processes to aid in the design and operation of offshore infrastructure.

Watch this space for outputs from this campaign! 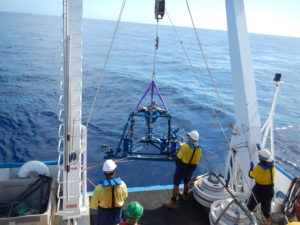 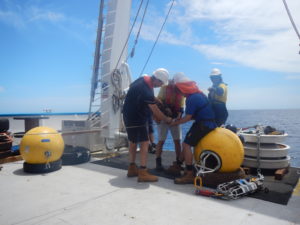 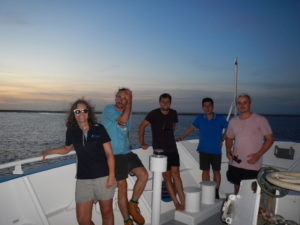