Changes afoot at the OFFshore ITRH 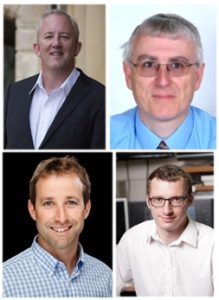 Phil Watson was appointed as the new Director of the OFFshore ITRH. Phil joined UWA from Fugro-AG where he was the Global Director of GeoConsulting. Phil was also appointed to the Shell Chair in Offshore Engineering whose overarching aim is to strengthen research and industry collaboration within WA’s offshore petroleum industry.

Phil succeeds Professor David White, who has taken up a new position at the University of Southampton. David will retain his involvement with the OFFshore ITRH as a Partner Investigator through strong research links within the various project streams and continued supervision of PhD students.

New Chief Investigators Professor Paul Taylor, Dr James Doherty and Dr Sam Stanier were also appointed. Paul recently joined UWA from Oxford University as the new Chair in Ocean Engineering. Paul is a world renowned researcher in hydrodynamics and bolsters the already impressive line-up in the Project 2: Wave-structure interaction team. James is a senior lecturer at UWA and joins the Project Three: Reliable moorings and risers team to provide additional leadership on the drilling riser fatigue research program. Sam was a recent ARC DECRA grant recipient and moves from the Research Associate role to a Chief Investigator role on the Project Four: Novel anchors and subsea foundation systems stream. Joe Tom will take over the Research Associate role in Project 4 vacated by Sam.

Finally, Professor Susan Gourvenec left UWA to take up a new position at the University of Southampton. Susan will continue to be involved in the Project 4 stream as a Partner Investigator through her ongoing supervision of PhD students.

In 2018 new PhD students will continue to swell the ranks of the OFFshore ITRH and the originally planned cohort will be exceeded.

As we approach our two year anniversary in April 2018, we look forward to continue delivering outputs which generate real impact for our industry partners: Shell, Woodside, Bureau Veritas and Lloyds Register.